the strange case of a siamese stool

Siamoo, is inspired by the life of the Siamese brothers Chang and Eng Bunker, a case from real life, which gives its name to this phenomenon: “Two and one at the same time. Two units linked. One unfolded unit. Two copies contained in one single original. Two lives contained in the same biography. Chang and Eng Bunker shared one corporal infrastructure, during their whole lifetime being forced to occupy the same place forever. They were born in 1811 in Siam, place name which would curiously baptize this way of human welding, but lived most of their lives in the United States, working for the P.T. Barnum Circus. They were acrobats, magicians and comedians. They both married the Yates sisters and lived all together for a long period, sleeping in a bed for four; Chang had 10 children and Eng had 12. After a row between the two sisters they went to live in separate houses. They agreed to share and spend three days in each house. They had successful business lives but with a tragic ending. Chang fell prey to alcoholism and suffered a significant stroke with the subsequent complications of pneumonia. One day, when Eng woke up, he found that Chang was not breathing anymore. Half of himself had died. His end was near. They shared the liver.”

Siamoo is a Siamese piece of furniture. Its name comes from joining the words Siamese + stool. It consists of two stools, which, despite being united, possess their own personality. Siamoo aims to look into the ideas of simultaneous individuality-duality; into the relations which arise between objects which are two and one at the same time. The same, but different. This crossbreed is the result of two traditional stools, the high industrial stool and the low domestic stool. The new link between both allows a rupture between the classic function and understanding of this typology of furniture, which sets up new relations and uses. What was once a stool can now be an auxiliary table or vice versa. What was “one” is now “two”, or vice versa.

Siamoo intends to incorporate classic elements as well, elements such as metallic shafts to regulate the height, which give the set greater flexibility and functional possibilities. It is not a matter of producing a static and finished object, but generating a mobile and versatile object, which offers new possibilities which come up as the user plays with it and investigates. The product proposed is an auxiliary piece of furniture, capable of adapting to domestic use as well as office use. It is adjustable at different heights by turning the seat. Both stools are articulated in their joint, which allows them to rotate and bring the units closer or farther away. The possible uses go from stool to auxiliary table. It is possible to obtain a temporary working place (low seat and high table), two auxiliary tables of different heights, one single auxiliary low table, two seats of different heights, as well as the various intermediate positions and combinations.

Siamoo is built with a structure made of folded steel plate, screwed to the central support of the shaft. This shaft allows the user to regulate the height of the platforms of the seat/table by turning them. The two entities which form the piece of furniture are joined by means of a common tubular joint, which permits the user to turn and bring the stools/tables closer together. The combination of both movements makes it possible to join the two entities forming one single surface. The seats/surfaces are made of machined wood or steel and admit personalization through various final finishes.

Currently siamoo is manufactured by IMASOTO (AVP Architects View Products),  and you can  buy it ! 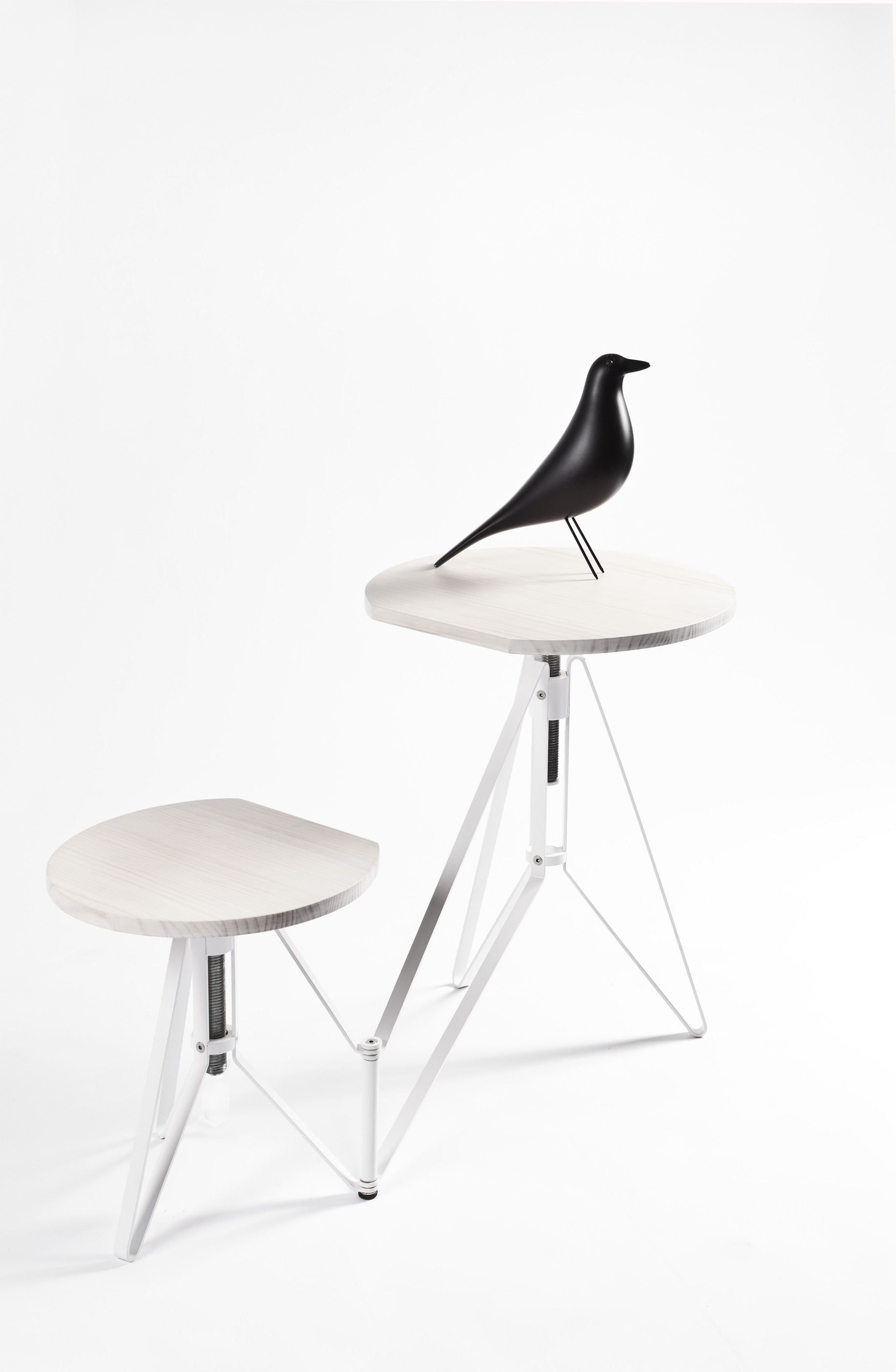 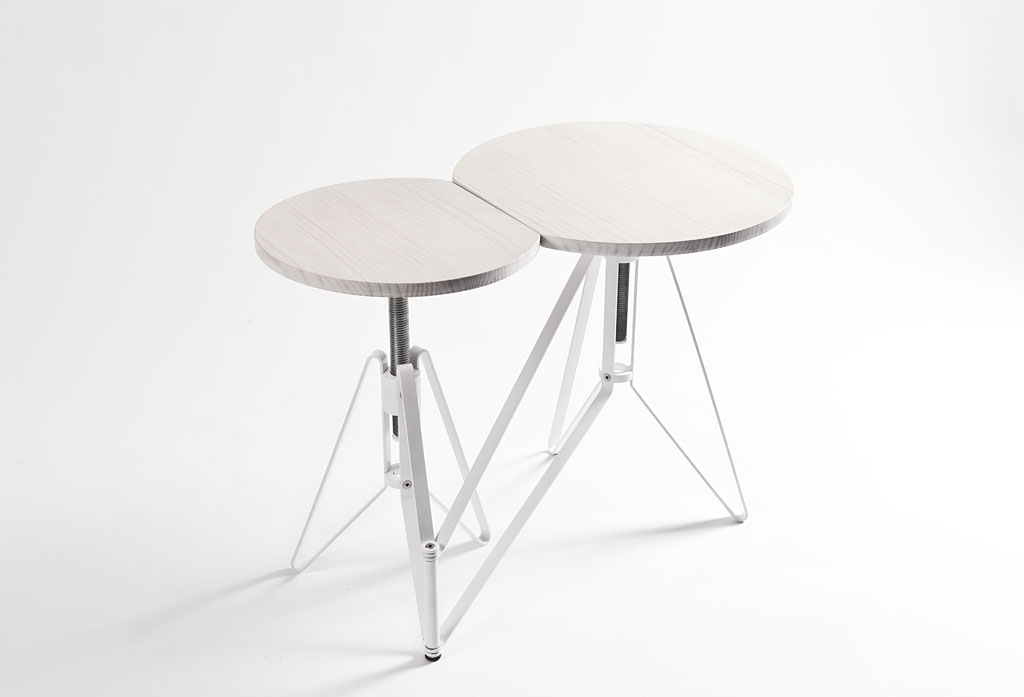 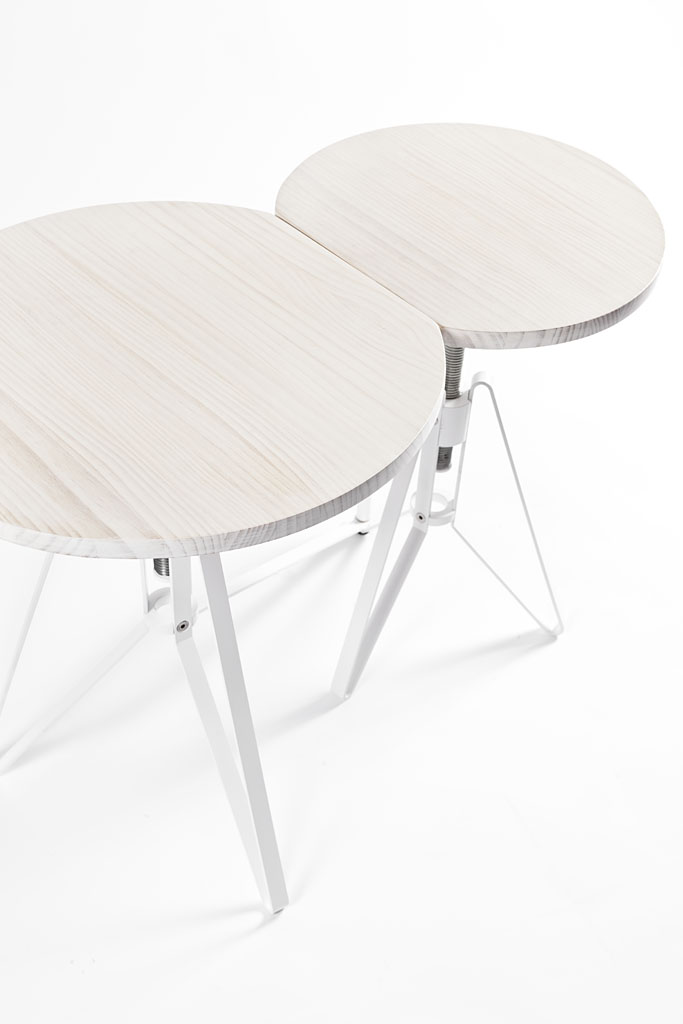 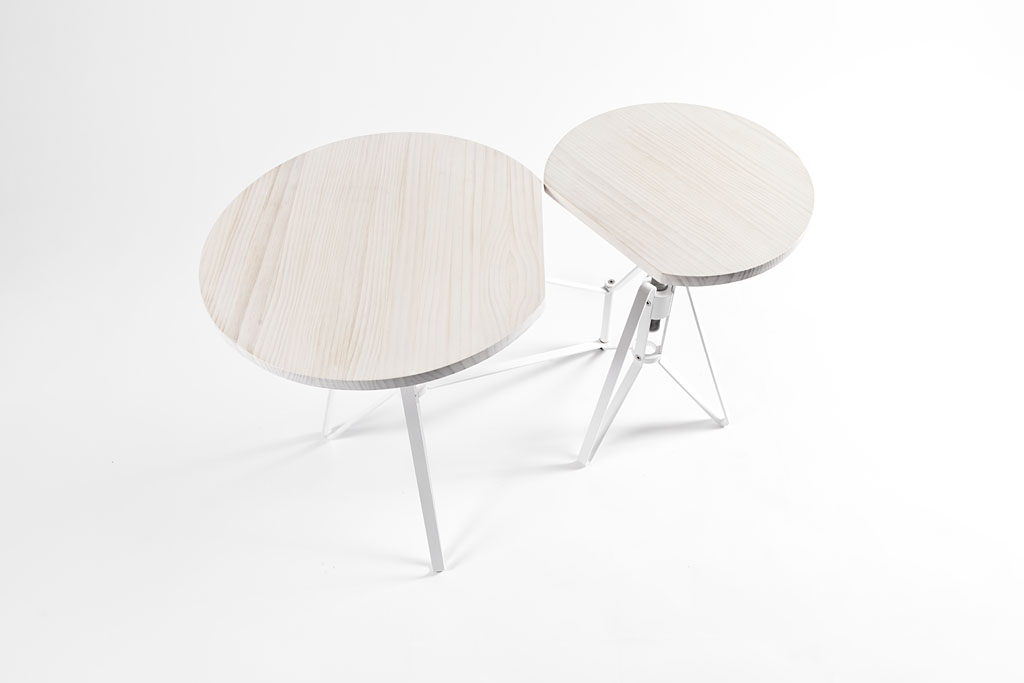